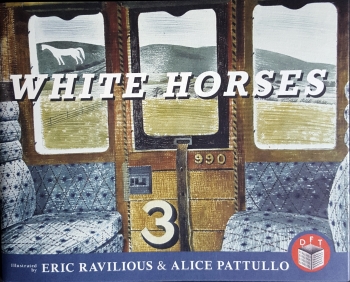 Jointly published by the Society and Design for Today, ‘White Horses’ is a beautifully re-imagined Puffin Picture Book.

Eric Ravilious started working on this project in 1939, reaching the dummy stages in 1941. A proposal was sent to Noel Carrington, editor of the Picture Puffin series, who was extremely enthusiastic. However, the project was put on hold as by then Ravilious was busy with family and work (he was an Official War Artist) and the wider proposal that Carrington had suggested would have been too great a commitment.

The dummy that Carrington had been shown was returned to Ravilious and then completely disappeared from sight, presumed lost. In a final twist of fate, Roland Collins, who had illustrated a book for Carrington in 1954, unearthed the dummy which is now held by the Wiltshire Museum.

Ravilious’ scribbled layouts and Carrington’s letter of 1941 give sufficient evidence of the content and extent of the intended Puffin. Puffin Picture Books alternated colour lithographs with black and white pages. Ravilious never attempted the latter for ‘White Horses’, however Alice Pattullo, a fan of Ravilious, has now completed the black and white drawings. Finally, over three-quarters of a century later, we are able to glimpse what the original book might have looked like.

The book is published in Puffin Picture Book format but with an accompanying wrap around dustjacket inside which is told the story of White Horses and the journey towards this book.

Copies of this title was sent to members with The Penguin Collector 92 in June 2019.

An article by Joe Pearson on the history of White Horses appears in PC92 with an unedited version inside the book's dustjacket. Published by Design for Today in co-operation with The Penguin Collectors Society, further information and copies through Design for Today.