The Art of Living

Usually my round up includes galleries and exhibitions that might encourage the inveterate book worm out into the open .... but apart from the fact that this is not currently a good idea, it is also difficult to forecast reopening dates so there is little point in looking forward until a few more weeks have passed.

In the meantime, it gives me a good excuse to bring some stay at home ideas to your attention - although I suspect you have plenty of Alice rabbit holes already planned!

Websites. As any number of the newspapers have suggested, many galleries have a walk-through of a selection of their pictures and exhibits; some include audio. By googling the places you are interested in or, for a more broad brush approach, 'virtual museum tours' you will find a wealth of choice. I was also interested to discover that some galleries have audio or video recordings of past lectures.

Podcasts. As you will be aware if you have followed my posts, I am a fan of the Backlisted podcast. There are many others to explore - perhaps you could share your favourites with me (book related or not) and I will add them to this post. Has anyone tried the London Review or TLS podcasts for instance.... or indeed the Penguin conversations with "leading authors and creative thinkers"?

Blogs. I would remind you to explore our links page which has some blogs for you to browse. One new one I have added is by The Silver Locket, a bookseller with Daunts, who recently did a blogging course with The Gentle Author to brush up her skills. Silver Locket's most recent post is on the Puffin Club. Another blog that might interest you is called Judging Books by Their Covers which covers a range of topics from the West African Library (number 115) to Penguin Specials (252), Science Fiction (267) to Penguin Crime (257) and a few more besides (Simenon at 245 and 246).

For Shakespeare fans, I have discovered that the Globe Theatre has made its plays available. There is a charge of each one but you can nearly imagine that you are in the pit! *A free play from the Globe will now be streamed once a week. Check out their website for the latest information. Continuing with plays, Time Out has now temporarily rebranded as Time In and tells me that there are several places to watch plays for free - Richard II (with David Tennant in the title role) can be seen on Marquee TV and the National Theatre is going to stream a play every Thursday night.

I know that our Editor would like to hear from anyone who managed to get to the various exhibitions that were only on for a short time before the great shutdown began. For instance, did anybody visit the Harland Miller at the York Art Gallery?

Now is the time to get out your Penguin Handbooks! I leave you with a few suggestions to be going on with. The thumbnail on the Home page which has given rise to the title of this little post, is of The Art of Living [PH38] by André Maurois, published in 1960. The other two pictures are of The Penguin Handyman [PH9] which was first published in 1945 (this third and further enlarged edition dated 1954) and Paint Your Own Pictures [PH22] published in 1953. 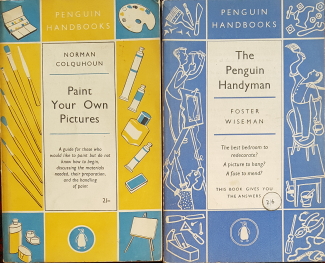